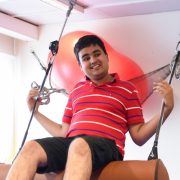 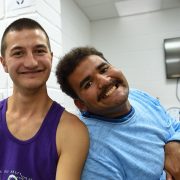 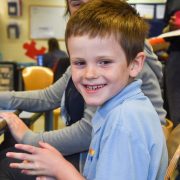 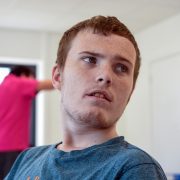 Join Jigsaw Trust for World Autism Awareness Week and help to promote understanding and acceptance for people with autism.

Below you can find some useful resources to learn more about autism yourself, or to share with your friends, workplace or school.

We hear from a couple of our families about the challenges and barriers they’ve overcome, and how Jigsaw is supporting their son/daughter to achieve their potential. You can also download our guide to Being Autism Aware, which contains further information about common challenges for individuals with autism and how you can take 3 simple steps in your day-to-day life to make the world a better place for people with autism. Our Autism Video explains what autism can be like and Jigsaw’s approach to ensuring that everyone with autism has the opportunity to reach their full potential.

If you would like to support Jigsaw’s projects and services for children and adults with autism this Autism Awareness Week please visit our donation page or find out more about fundraising for us here.

Timothy, like many people with autism, finds it hard to cope with new situations and changes to daily routines. Thanks to Jigsaw’s support, while the pandemic has been causing disruption to our daily lives, Timothy has the tools he needs to manage. Timothy’s mum, Adele, kindly told us their story:

“When Timothy was younger we were struggling with his behaviour and we simply couldn’t find a way of engaging him in learning. We met other parents of autistic children and heard about ABA. Working with an educational psychologist who suggested this could be a great option for Timothy, we combined his mainstream schooling with a home ABA programme. Unfortunately, his school at the time didn’t seem to understand what we were trying to do and wouldn’t adapt. It got to a point where we pulled Timothy out of school completely and continued with just the home programme.

We moved to Hampshire when Timothy was 11 and we decided it was time to look for a special school because we felt it was important for him to be around other children. We were worried that Timothy would be seen as having significant needs and that therefore expectations for him would be lower. We didn’t want that for our son.

We couldn’t believe our luck when we found Jigsaw. From the beginning it was obvious that the values and commitment from everyone at Jigsaw are second to none. I have total trust they’ll do everything they can to help Timothy reach his potential and focus on what he can do, rather than what he can’t. They challenge him a good amount; he’s encouraged and knows what is expected of him but he’s never over-pushed so that he feels like he can’t do something and loses confidence. Jigsaw understands the way autistic children learn and their approach allows children to succeed. I think it’s really important that we can see progress using data too, so we know he’s moving forward.

There are so many ways Jigsaw has made a difference for us. Timothy’s behaviour has always been very challenging and I have no doubt that without Jigsaw’s support using Behaviour Analysis he would be in full-time residential care because we wouldn’t be able to manage at home. As well as this, his communication, verbal understanding and ability to express himself have all come along massively.

Perhaps the best thing Jigsaw has done is help Timothy to understand more about how the world works around him. They’ve allowed him to make sense of the world and see where he fits. We set out schedules for Timothy and now he can understand the concept of ‘tomorrow’ and ‘in 7 days’ time’. It makes the world less scary to him the more he can understand.

It’s made such a big difference when dealing with the pandemic and lockdowns over the past year. Normally Timothy and I go to Starbucks together at the weekend and we’ve had to explain to him why we can’t do that at the moment and when we will be able to go again. We have to use simple terms, like saying that people are getting sick and that police have closed the shops, but he’s processing it really well because he has those communication skills and that understanding. Jigsaw have been absolutely phenomenal over the past year and we’re so grateful that he’s still got his daily routine.

Next year, when Timothy turns 19, we’re planning for him to go to JigsawPlus. We didn’t really want him to go anywhere else because we’re always confident he’s safe at Jigsaw. I just want him to be happy and I hope that, once we can’t shelter him anymore, he will have the tools to cope with supported living. His communication is vital for that because he’ll have to be able to tell people what he needs. Timothy may never be able to go shopping or take a bus on his own, but as long as he can understand the situations he’s in and knows how to behave then his world can be broader. I know Jigsaw will encourage and teach him to be independent to the extent he can be.”

NB: individual names and images have been changed to protect their privacy

Autism is a spectrum disorder, which means that everyone experiences it differently. Jigsaw supports individuals with higher needs; in addition to social and communication challenges, our pupils and learners may need support with behaviour that challenges, sensory processing disorders, or personal care.

We believe that with the right support anyone can learn new skills and become more independent, no matter the barriers they face. We put this into practice when supporting Owen. Owen, who is 23, is autistic and has a learning disability. He started at Jigsaw when he was 11 and is now supported at JigsawPlus. His mum Hayley told us about how Jigsaw has helped him develop skills beyond all expectations:

“Owen’s progress at Jigsaw has been absolutely amazing. I had zero expectations for him when he was younger because his disability was so severe. He’s got so many skills now that he would never had had if not for Jigsaw.

The list is endless. Owen’s language was very limited before, but now he speaks and has all his needs met by speech. He reads and can write well, he’s great at using the computer, he swims brilliantly. There are so many things – he’s even learning Spanish! He doesn’t make sentences but he can translate loads of words.

Although Owen won’t ever be able to live on his own he’s got tons of independent skills. Jigsaw have helped him learn to dress himself, wash himself, and feed himself. With supervision he can cook too.

Before, his behaviour was so challenging, it felt like he was out of control. He would pull my hair and bite me. He didn’t understand anything and was very locked away in his autism. Jigsaw have helped close the gap between his world and mine. Now he generalises his skills very well and he references things going on around him, like pointing out what’s happening on TV. He understands and listens to instructions so it’s much easier for me to take him out places and generally have a better relationship with him. Because he has high anxiety levels sometimes he still gets confused and frustrated but overall he’s happy – and he even calls himself Mr Happy!

I’ve sacrificed a lot for Owen and I take my responsibility to him seriously. I’m not someone who gives up easily. But if Owen didn’t have the right support then I wouldn’t be able to have him home with me. He would have had to go into residential care a long time ago because I wouldn’t have been able to manage. Jigsaw gives him the support he needs and if he wasn’t getting that I don’t think I’d be able to sleep at night.”

NB: individual names and images have been changed to protect their privacy

Download our ‘Being Autism Aware’ guide here to support a wider understanding and knowledge of autism in our community. If you would like further information, please contact [email protected] directly.
Watch our short animated video describing ‘What is Autism?’ and how Jigsaw supports children and adults with autism.  Click here to visit our ‘About Autism’ page and video.

You can make a difference for individuals like Owen and Timothy by making a donation this Autism Awareness Week, whether it’s a one-off gift or by setting up a regular gift through a direct debit. Thank you for your support.

Back in 2008, the United Nations General Assembly unanimously declared 2 April as World Autism Awareness Day (A/RES/62/139) to highlight the need to help improve the quality of life of those with autism so they can lead full and meaningful lives as an integral part of society.  For more information on World Autism Awareness Day, please visit the United Nations’ website: UN.org webpages directly.

“On this World Autism Awareness Day, let us all play a part in changing attitudes toward persons with autism and in recognizing their rights as citizens, who, like everyone else, are entitled to claim those rights and make decisions for their lives in accordance with their own will and preferences.”

These allow us to recognise and count the number of visitors and to see how visitors move around our Site when they are using it. This helps us to improve the way our Site works, for example, by ensuring that users are finding what they are looking for easily. The cookies collect information in a way that does not directly identify anyone.