2020 has been a tumultuous year and the disruption caused to everyday life has been extremely challenging for children and adults living with autism.

By supporting our Christmas Fundraising Appeal, you can help ensure every individual can reach their potential and have the best possible future, no matter how challenging the circumstances. 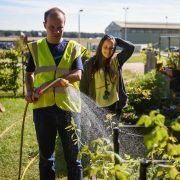 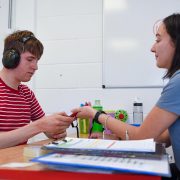 Georgia kindly offered to tell us about her and her son’s experiences and the impact Jigsaw has had on providing a reassuring future for their family.

My son Michael is 19 and has been supported by Jigsaw for 10 years. Michael has autism and is non-verbal, and he has always needed 2:1 support at school. We’re in a great place now, but that wasn’t always the case.

When Michael was little his behaviour was extremely challenging. He would bang his head on hard surfaces and he would spit at people. It made life so difficult. Because of Michael’s behaviour we often couldn’t have friends and family come around. At the time, Michael was at a special school but when he was 8 the school told me that they could no longer meet his needs or keep him safe. After that came the 6 hardest months of our lives. Michael was out of school for half a year, so I was at home with him with no other support. I was shocked when I was told that his behaviour was too challenging for two other schools. I’d been in contact with Jigsaw for over a year and eventually I found out that there was a place for Michael to go to Jigsaw School. I cried with relief that whole day. I just knew Jigsaw was the place for us.

It took Michael a little while to settle in because he was slow to trust new people but, as he built up a relationship with the teachers, things really started to improve. The patience of the staff at Jigsaw was amazing. They monitor every little behaviour and it really helped Michael when he was rewarded for good behaviour and learning. The changes we’ve experienced since he started at Jigsaw have been incredible. Now, I hardly see any challenging behaviour with Michael.

The changes go even further than supporting Michael with his behaviour. Michael is non-verbal so communicating with him could be difficult, but ever since Jigsaw gave him an iPad and taught him to use an alternative communication app called Proloquo2go the rest is history! Everything he likes and does is on his iPad, he’s always using it to ask me when we are going to go to his favourite places – he especially loves going to Brighton and eating at Five Guys restaurants!

Jigsaw has also really helped Michael with his self-care. He’s now been out of nappies since he was about 14. We’re continually making progress as these things take a long time to learn, but I still can’t believe it – I never thought he’d stop wearing nappies. All I want for Michael is that he’s able to do as much as he can independently and it’s amazing knowing that everyone at Jigsaw shares this goal when supporting him.

A few years ago, I was already worrying about what was going to happen when Michael turned 19 and his support at Jigsaw School finished. When JigsawPlus opened I was so keen for him to go there because I knew it was the only place he was going to be happy and where he’d get the support he needs. The transition to JigsawPlus has gone brilliantly. Michael is adjusting well and already feels confident with his support workers. We started building up slowly, from 3 days in September up to a full 5-day week at the end of October.

I’m finding it strange not to have to plan for things like half-term – Michael going to JigsawPlus is a big change for me as well. When he was younger it was much more difficult to go out but now we can go out together to restaurants, theme parks, or on walks and it’s so much easier. We can really enjoy our quality time together now. I’m so grateful for this and for everything Jigsaw has done for us.

While life will always be full of uncertainties and disruptions, Jigsaw will keep doing everything we can to ensure the best possible outcomes for families like Michael and Georgia. We will continue enabling children and adults with autism to develop academic and vocational skills and improve communication abilities. Our on-site offerings, such as Gardening and Baking, will be there to replace activities that can’t currently be accessed in the community.

You can make a real difference by making a donation this Christmas, whether it’s a one-off gift or by setting up a regular gift through a direct debit. Thank you for your support.

These allow us to recognise and count the number of visitors and to see how visitors move around our Site when they are using it. This helps us to improve the way our Site works, for example, by ensuring that users are finding what they are looking for easily. The cookies collect information in a way that does not directly identify anyone.